Biography: Ella Gabitov, PhD, is a research associate at the McConnell Brain Imaging Centre of the Montreal Neurological Institute affiliated with McGill University. In her research, she uses a multimodal approach combining psychophysics and cutting-edge technologies for non-invasive brain functional imaging to study neural mechanisms underlying acquisition of procedural (“how-to”) knowledge in humans. This “how-to” knowledge is at the basis of cognitive and executive skills that allow adaptive behaviors necessary for effective everyday functioning. Areas of her special interest include motor skill consolidation, reactivation-based plasticity, and the role of prediction error signals in regulating these memory-related processes. Dr Gabitov received her undergraduate degree in mathematics and philosophy. She holds an MA. and PhD in brain research from the University of Haifa. Over the course of her graduate training, she worked under the supervision of Prof Avi Karni studying neural substrates underlying encoding and consolidation of motor skills. In 2014, she joined the laboratory of Prof. Julien Doyon at the University of Montreal to study the role of sleep in procedural and declarative memories. In 2017, she was invited to continue her research at the Montreal Neurological Institute, where she currently holds the position of research associate. She contributed to major brain science initiatives such as the Human Brain Project. Funding agencies supporting her research include the ERA-NET NEURON, Canadian Institutes of Health Research (CIHR), and Fonds de recherche du Québec – Santé (FRQS).

Abstract: Memory integration as a unified model of lasting memory formation and modification

“When learning a new task, initially encoded memories are not instantaneously stably stored in the brain. Rather, they are labile and can be easily disrupted by new experiences until they are gradually stabilized by a slow-operating process called consolidation. This process requires time and may be facilitated by sleep. However, there is evidence suggesting that successful consolidation does not render memories permanently stable. Instead, they may destabilize and return to their labile state when retrieved and be subject to disruption unless they are re-stabilized through a consolidation-like process called reconsolidation. The idea of re-opening a time-window during which consolidated memories can be changed is very exciting because it offers an opportunity to facilitate learning as well as weaken or even delete maladaptive memories. In this regard, it has been proposed that reconsolidation, as opposed to consolidation, serves a unique adaptive function maintaining memories to be useful and relevant. Alternatively, it is possible that reconsolidation is not mediated by dissociable mechanisms but rather corresponds to a never-ending consolidation process. In this talk, I will present the results of my work that demonstrate that consolidated motor memory in humans can be disrupted by combining memory retrieval with behavioral interference. I will argue that such disruption is the product of the integration of new competitive knowledge through the de novo consolidation process rather than a failure of reconsolidation. I will further suggest that memory integration occurs through a tagging and capture process – a molecular mechanism that shapes the way memory is represented in the brain.” 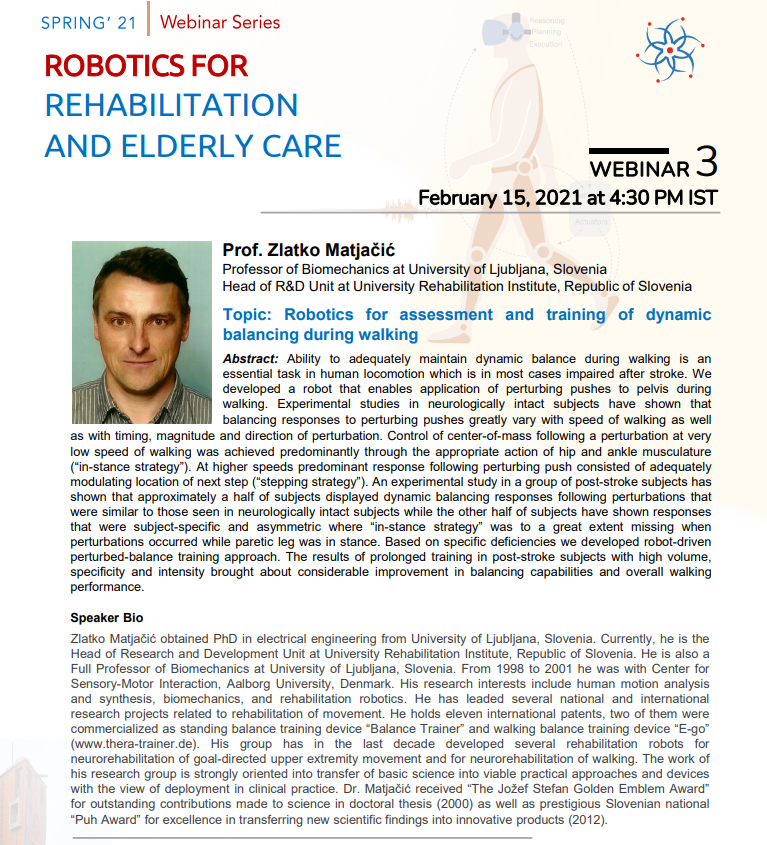 Previous Post Lecture on 'Robotics for assessment and training of dynamic balancing during walking' by Prof. Zlatko Matjači 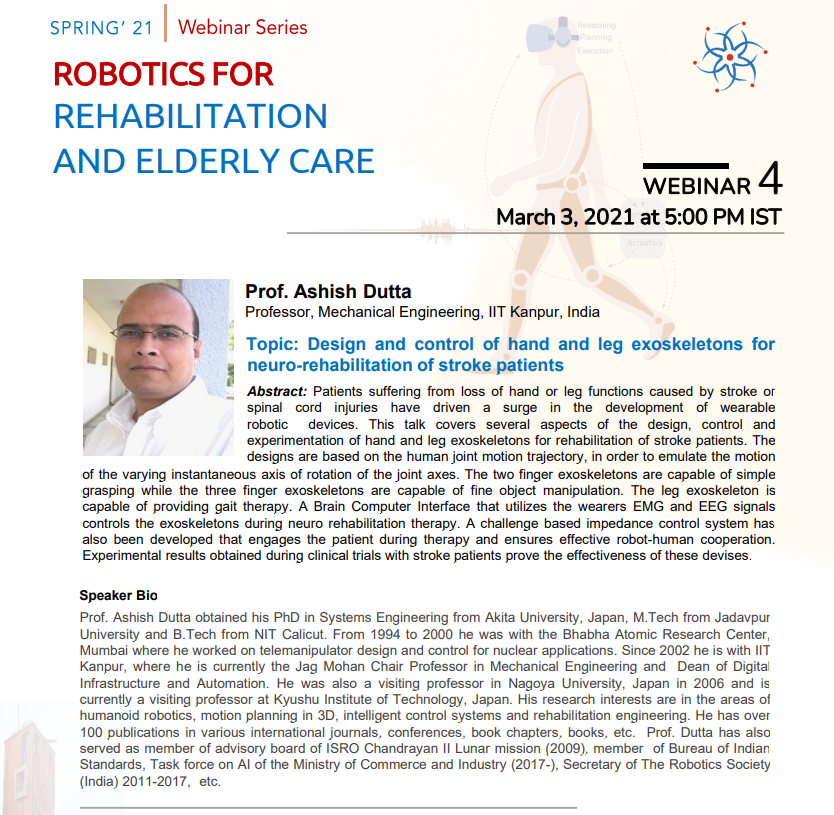 Next Post Lecture on 'Design and control of hand and leg exoskeletons for neuro-rehabilitation of stroke patients' by Prof. Ashish Dutta 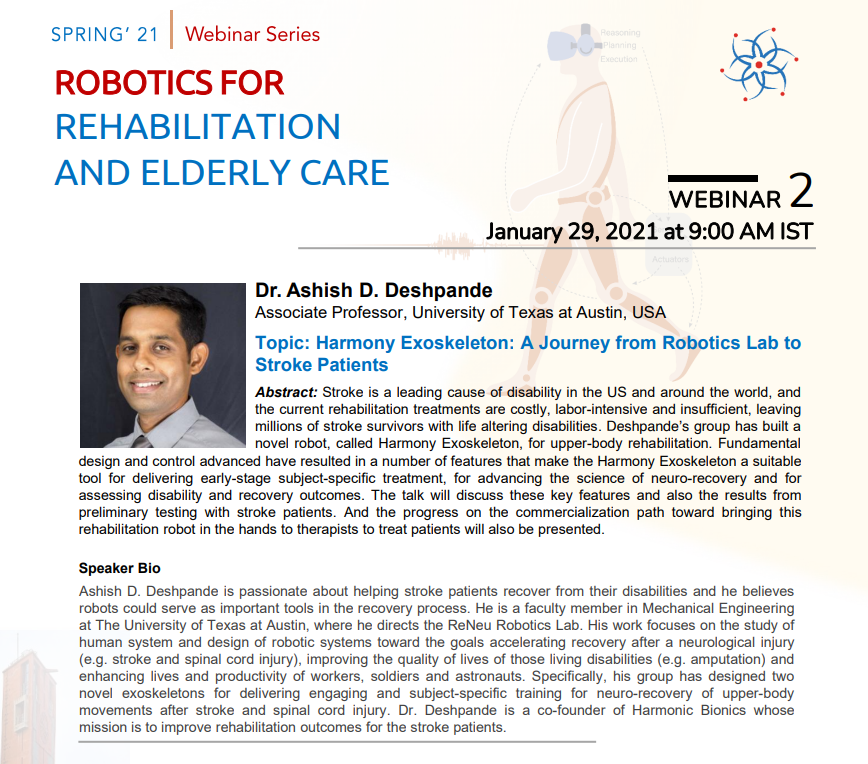 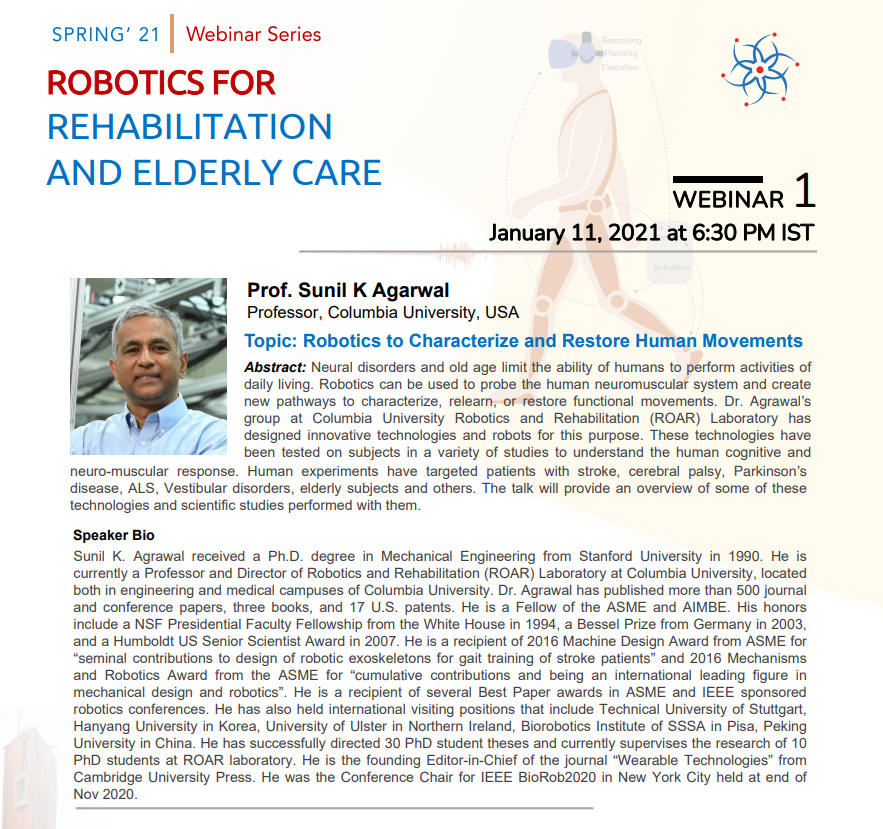 February 15, 2021 Lecture on ‘Robotics for assessment and training of dynamic balancing during walking’ by Prof. Zlatko Matjači Read More